Posted on August 10, 2017 by carolyncholland

Billionaire newspaper publisher Richard Mellon Scaife (Dick Scaife) was a serious collector who could and did purchase very dramatic one-of-a-kind objects. The former Tribune-Review publisher and billionaire heir to the Mellon fortune died on July 4, 2014.

Items from his four American estates (in Shadyside and Ligonier, Pa.; Nantucket, Mass., and Pebble Beach, Calif.) were sold by Christie’s auction house in New York.

The most valuable lot, the star of 533 items on the auction block, was

The gleaming set of more than 1,000 custom-made, engraved dinner service pieces included 18 salt cellars, 28 butter dishes and 36 seafood forks. It was made by special order for the engineer of the Brooklyn Bridge, Washington Augustus Roebling, and belonged to multiple generations of the Roebling family, including Mary G. Roebling, the first woman to lead a major bank and first female governor of the American Stock Exchange.

Washington Augustus Roebling was the engineer responsible for building the Brooklyn Bridge. On Aug. 1, 1889, 6 years after its completion, an extravagant silver-gilt dinner service arrived at the house of John A. Roebling, whose firm became the world’s largest supplier of electrical wire and bridge cable and the exclusive supplier to the Panama Canal.

So why am I sharing this story?

Because I’m on the search for information on a green turtle silver ladle marketed at auction and priced at $6,000. Had it been unrealistically priced at $100 or less I might have been enticed to purchase it.

About November 2009 my friend Fran called me shared an Internet link to the Neal Auction Company. She’s been very helpful to me so I immediately clicked on the link and scrolled down to Lot 219: 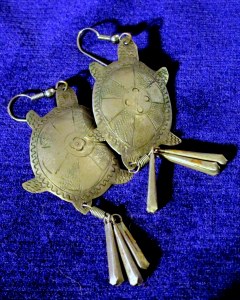 Turtle earrings a friend gave me after hearing the story of the green turtle soup ladle.

Now my interest piqued. The note on the auction site provided information I already knew:

What it didn’t say was that Van Berckel was the husband of Rosalie de Leval, the French woman who is the main character in my historical novel.

The engraving on the soup ladle continued:

The listed/expected cost of the soup ladel, 14 1/4 inches long weighing approximately 9.5 troy ounces, was $6000/9000. Perhaps in the same range as the price of the silver service set in the Dick Scaife auction lot.

Fran and I researched further. Also being auctioned off were several wooden bowls. This indicated to me that there was probably someone who’d collected items belonging to Van Berckel.

I’ve discovered it’s almost impossible to discover the root sources of who owned and collected such items. I researched it because the results might reveal more about who this man, Van Berckel, was. There’s little information on this man in the records I’ve researched.

More questions. Who are de Lamerie and Cahn? Where were their pieces exhibited? And just what are green turtles?

And, why am I being taken down these research roads? Will the results prove helpful in writing my novel? Or  am I just being aggravated into learning more than I want to know?

This journey is in progress. For now, I’ll end with the above questions. Perhaps the answers will be revealed in later articles.

In several if my nine lives I have been a medical lab technician and a human service worker specializing in child day care, adoptions and family abuse. Currently I am a photo/journalist/writer working on a novel and a short story. My general writings can be viewed at www.carolyncholland.wordpress.com. My novel site is www.intertwinedlove.wordpress.com.
View all posts by carolyncholland →
This entry was posted in Feature Articles, Novel, WRITING. Bookmark the permalink.