Posted on December 24, 2015 by carolyncholland

ON THE SIXTH DAY OF CHRISTMAS

MY TRUE LOVE GAVE TO ME 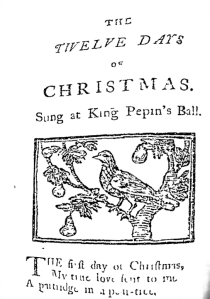 Each year my husband Monte and I design a Christmas ornament/card. On some years we’ve incorporated ornaments depicting the gifts in the popular song, The 12 Days of Christmas. It’s words appear to be a secular, having nothing to do with the reason for the season: the birth of Jesus Christ.

The song’s “true love” and its partridge in a pear tree represent Jesus.

The seemingly nonsensical gifts are code words for Christianity a child can remember. They represent the Christian message:

Six different ornaments, each depicting one creation day, were designed.. 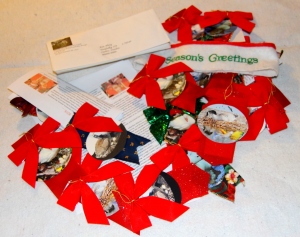 Included in the 6 copyright-free photographs of geese a-laying, which I found on the Internet, are two considered “heroine geese.”

The first goose heroine represents the first creation day, the heaven and the earth, night and day:

On Mother’s Day, in mid-May, 2015, a Canada goose was sitting on her nest of eggs. Two walkers noticed smoke rising from the ground as they passed by. Investigating, they found a smoldering goose nest, a little blaze around it. It held 6 eggs. The mother wasnearby…a large section of her flight and tail feathers were burnt clean off in her attempts to smother the fire…(her) bill was also damaged by the flames.

The fire was deliberately set by someone who put cigarette butts in the nest.

The Canadian goose did the motherly thing by taking the brunt of the heat and the fire.

Later she received daily shots of antibiotics to prevent infection. Five of her eggs, some having scorch marks, were placed into an incubator at a rehab center. It was possible they were damaged beyond repair—and would not hatch.

The second heroine goose is depicted on creation days 4 and 5.

On May 2, 2013, during a blizzard hit the Midwest, a storm with a snowfall…likely exceed a foot…a goose was nesting on a city-owned retention pond. The goose remained on her nest even while she was buried up to her beak by snow.

Goose 5: sea creatures and birds of the air

The goose remained on the nest even as some of the snow melted from her back, unburying her some. Temperatures were predicted to quickly rise from near freezing to about 700, putting the mother’s eggs at risk to loss by flooding due to the rapid snow melt. This mother goose persisted in protecting her unhatched brood from the elements by continually working feverishly to rebuild her nest after an overnight water rise. 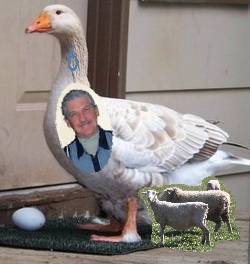 NOTE: the man on the 6th day of creation ornament is my brother, Hugh Kerry Lipsius.

Nothing was created on day 7, which was set aside for rest.

I hope when you are singing (or hearing sung) The Twelve Days of Christmas you will recognize it’s Christian, its Christmas, message.

And when you see a goose, you will think of the 6th day gift, six geese a-layin’.

I WISH YOU ALL A MERRY CHRISTMAS AND A HAPPY NEW YEAR.

In several if my nine lives I have been a medical lab technician and a human service worker specializing in child day care, adoptions and family abuse. Currently I am a photo/journalist/writer working on a novel and a short story. My general writings can be viewed at www.carolyncholland.wordpress.com. My novel site is www.intertwinedlove.wordpress.com.
View all posts by carolyncholland →
This entry was posted in Christmas, HOLIDAYS and tagged All posts, Geese heros, Inspirational, Latest post, Lifestream, Miscellaneous, postaday2015, Six Gesse a laying, Sixth Day of Christmas, Twelve Days of Christmas. Bookmark the permalink.