Posted on September 17, 2015 by carolyncholland

We purchased items we could use, but mostly we attended to purchase cider. Lots of cider. We would stay to the end of the auction when they would auction off the unsold cider in bulk. Our car could be loaded with 50-70 gallons of cider.

Upon our arrival home we quickly put large pots of cider on the stove to heat, jarred it, and hot-packed the jars. Thus, we had sufficient apple juice for the long winter and summer.

It was an all night process. One of us would sleep while the other worked. By morning, church time, all the cider was apple juice. All that was left was to take good naps, clean up the mess, and take the jarred juice to the basement shelves.

Other times we would collect apples anywhere we could find them. Apple drops in the community park were a great resource. We also added pears if we felt we needed more fruit. Then we’d cart them to an Amish cider press in New Wilmington, and head home with many jugs of cider, of which we drank some and canned the rest.

Now we attend The Farmers and Threshermen’s Jubilee in New Centerville, Pennsylvania, which supports the New Centerville and Rural Volunteer Fire Companies. This September festival features a wide range of great food and fantastic entertainment. The fun includes a large parade and an “Outhouse Dash” in which teams of four or more race to the finish line with an Out-house in tow.

However, a big draw for us is the apple cider they make—the old fashioned way. No preservatives. Good stuff. 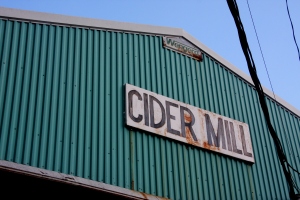 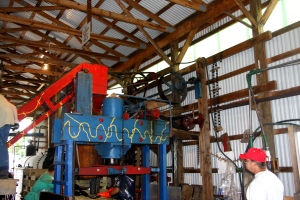 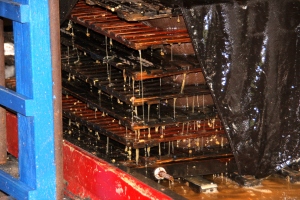 This spring (2015) I selectively read Memoirs of Madame de La Tour du Pin, a book many persons had suggested I read to provide background for my novel. Madame du Pin was a French refugee escaping the horrors of the French Revolution, and she ended up on a farm in the Albany area of New York. Below is her description of making apple cider in 1794.

Although all the joy had gone from our home, we still had to go about our daily tasks and we encouraged one another, my husband and I, to seek distraction in the need in which we ourselves to find employment for every single minute. It was almost apple-picking time. The crop promised to be plentiful, for the trees were heavily laden. There were almost as many apples as leaves. The previous autumn we had followed an old Bordeax custom and hoed a patch four to five feet square around each tree. It was the first time this had been done to them. Indeed, Americans were ignorant of the benefit which this practice has on growth and when we told them that we had owned vines where this operation was repeated three times a year, they thought we were exaggerating. But when spring came and they saw our trees covered in blossoms they began to think it must be due to some kind of magic.

Another idea was also widely remarked upon. Instead of buying new barrels of very porous wood for our cider, we hunted in Albany for a number of Bordeauz casks and for some marked ‘Cognac’, or a type well known to us. Then we arranged our cellar with as much care as if it had been going to house the wines of Medoc.

We were lent a mill for pressing the apples and to it we harnessed an ancient, twenty-three-year –old horse which General Schuyler had given me. the mill was exceedingly primitive: there were two interlocking, grooved pieces of wood, like ratchets, and these were turned by the horse, which was harnessed to a wooden bar. The apples fell from a hopper into the interlocking pieces of wood and when there was enough juice to fill a large basket, it was taken to the cellar and poured into the casks.

The whole operation was exceedingly simple and as the weather was very fine, this harvesting became a delightful recreation for us. My son, who spent the whole of every day astride the horse, was convinced that his presence was vital to the task!

When the work was finished, we found that, after putting aside enough for our own use, we had eight or ten casks to sell. Our reputation for honest dealing was a guarantee that not a drop of water had been added to the cider, so that it fetched more than twice the customary price. It was all sold immediately. As for that which we kept for ourselves, we treated it just as we would have done our white wine at Le Bouilh. (pp. 277-278)

In several if my nine lives I have been a medical lab technician and a human service worker specializing in child day care, adoptions and family abuse. Currently I am a photo/journalist/writer working on a novel and a short story. My general writings can be viewed at www.carolyncholland.wordpress.com. My novel site is www.intertwinedlove.wordpress.com.
View all posts by carolyncholland →
Aside | This entry was posted in Novel, WRITING and tagged All posts, History, Latest post, Lifestream, Lifestyle, Making apple cider, Making apple cider 1790s, Memoirs of Madame de La Tour du Pin, Miscellaneous, New Centerville (PA) Farmers and Thresherman's Jubilee, postaday2015. Bookmark the permalink.