Posted on September 6, 2015 by carolyncholland

WHAT ABOUT THE LIFE SAVER® MONUMENT 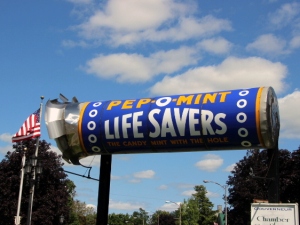 For that Stormy Breath.

My first view of the Lifesavers monument greeting visitors entering the south end of Gouverneur, New York, was likely in 1988, while driving through the town to visit with the family of my husband, Monte Holland. The replica is difficult to miss.

The Pep-O-Mint candy roll replica on Gouverneur’s village green was one of 5 giant Life Savers candy rolls suspended at the base of the Port Chester, New York, building where the Life Savers operation existed between 1920-1985. Gouverneur received the giant Life Savers® replica in honor of E.J. Noble’s birthplace and hometown. It was erected by the Gouverneur Rotary Club on November 10, 1987.

Monte’s parent’s lived north of Gouverneur, so we had to pass through the town to get there. The monument is bigger than life, difficult to miss.

I’m always impressed by the partially opened package of Pep-O-Mint Lifesavers souring high against the blue sky or dark sky, shining from sun rays, water drenched, or snow covered from the weather of the day. Each time it reminds me of opening an aluminum wrapped package of multi-colored candy, each round piece having a hole in the middle that made it look like a lifeguard’s tool, the round lifesaver ring.

I finally decided to look up the background of this iconic Lifesaver’s monument.

Once upon a time in Cleveland there was a chocolate candy maker named Clarence Crane. Hot to scorching summer weather made chocolates difficult to sell in the summer months, so, in 1912, he decided to create a “summer candy” to boost his summertime sales.

At that time most of the mints available came from Europe and they were square in shape. Mints must have been a popular candy, thus Clarence developed a line of hard mints that could withstand heat better than chocolate.

However, Clarence lacked the space and machinery to make them.

One day, while he was purchasing bottles of flavoring from a drug store, he noticed the druggist operating a hand-operated pill-making machine that produced round, flat, pills. Clarence adopted the idea for his mint candy and contracted with a pill manufacturer to press the mints into shape.

The pill manufacturer, whose machine was malfunctioning, found that the pressing process worked much better when the mints were stamped out with a hole in the middle.

It was about this time that ships were beginning to use round life preservers with a hole in the middle, which could be tossed to passengers who fell overboard. Clarence decided to punch a tiny hole in the center of his round candies, which added a life-preserver touch to them.

He marketed the new candy “Crane’s Peppermint Life Savers” because they looked like miniature life preservers. On August 13 the next year he was issued the United States trademark #71068992,

Crane’s Life Savers also had an ironic popularity, since the Titanic had been lost in 1912. Crane’s slogan: For that Stormy Breath.

While E. J. Noble was a marketing whiz, Robert was an engineering genius. They started their business in a one-room Manhattan loft with six girls.

When they acquired the business they discovered its packaging allowed the mints to get soggy and lose their freshness. Robert solved this problem by inventing an easy-to-open tin foil wrapper with a wax wrapper, which kept the mints fresh. The wrapping switched to aluminum foil in 1925.

The packaging of Life Savers was done by hand until 1919, when machinery was developed.

Being a master salesman E. J. Noble promoted his candy by selling it for five cents and having it placed near the cash registers of saloons, cigar stores, drug stores, barbers shops and restaurants. He then requested that the cashier made sure that each customer, regardless of what he or she bought, got a nickel in the change being returned. The idea moved like wild fire as most people used the nickel to purchase the candy.

Image from the State Library of New South Wales

He continued making the original peppermint flavored Life Savers while expanding the product. In 1929 hard-candy fruit rings, introduced as the “fruit drop with the hole,” were introduced. The popular five-flavor pack (lemon, lime, orange, pineapple, and cherry) was introduced in 1935. Through the years since then more than 40 flavors of Life Savers have been created.

During World War II other candy manufacturers donated their sugar rations so that about 23 million boxes of LifeSavers could be packed into military field rations. This allowed G. I.s to introduce the candy to foreign lands. One can envision soldiers during the War popping a life saver into their mouths.

Even during the Depression families found money to buy candy for the kids. It was a small treat to make people forget about hard times. Life savers indeed became a part of American history.

The Marx Brothers 1932 comedy, Horse Feathers, included one of the early product placements in cinema.

Clarence Crane may have regretted his decision to sell, since Life Savers earned E. J. Noble many millions of dollars.

In several if my nine lives I have been a medical lab technician and a human service worker specializing in child day care, adoptions and family abuse. Currently I am a photo/journalist/writer working on a novel and a short story. My general writings can be viewed at www.carolyncholland.wordpress.com. My novel site is www.intertwinedlove.wordpress.com.
View all posts by carolyncholland →
This entry was posted in Feature Articles, WRITING and tagged All posts, Clarence Crane, Commentary, Edward J. Noble, Gouverneur: NY, Latest post, Lifesavers candy, Lifesavers monument: Gouverneur NY, Miscellaneous, postaday2015, Robert Noble. Bookmark the permalink.

2 Responses to The Life Saver Monument in Gouverneur, N. Y.