Posted on August 25, 2015 by carolyncholland

A dressed-down footwear trend is sneaking into offices across the country — the tennis shoe, according to an August 23, 2015, Tribune-Review article.

However, if you have worn out sneakers, or you’re against sneakers in office settings, I have a solution that perhaps one Ligonier Valley resident tried: dispose of those sneakers by throwing them onto overhead wires.

My husband Monte and I were sitting outside Jioio’s Little Italy restaurant in Ligonier, enjoying the wonderful weather and people watching while waiting to order spaghetti, when something high in the sky caught my attention. Something was hanging from the overhead wires across the road. Wondering what new gadget was connected to the wires I grabbed my camera and walked across the street, only to discover it was a pair of sneakers slung across the wires. 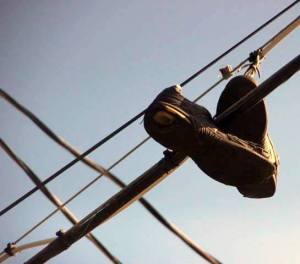 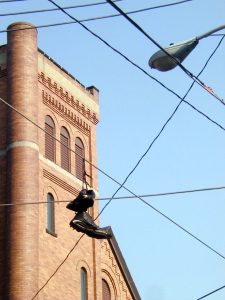 I wonder who’s walking around without their sneakers? I queried on the Ligonier Unpolished‘s Facebook site, adding a photo for good measure.

There are sneakers above the bridge on the trail too, Beth commented on my FaceBook post. Paula confirmed this: We saw the ones at the bridge for the walking trail too.

Isn’t there a meaning behind that? Terri asked.

…this has been happening since i was in school, i think it means someone lost a pair of shoes, Jesse wrote.

It so happened that a knife was found on a local road and a picture of it was posted almost concurrently with my sneakers slung-across-the-wires post.

Ok so now we have sneakers hanging from a wire & a butcher knife over by giant eagle.. Anyone want to gander on the story here? Haha Angela responded. Ahh, a story writer.

This is like the game of clue. Need to find who the knife belongs to by giant eagle and now these shoes…. Lol It is your turn Miss Scarlett …. Jennifer wrote.

When I was in Baltimore, that meant that you could buy drugs from someone near that corner. They wouldn’t do the transaction there. But they’d meet there. Ted chimed in.

LOOOLLLL – I grew up in Westmoreland county, and lived in many places!!! Never heard it was a “marking for drugs” – guess maybe we should stop by Holy Trinity for some? Kathy noted.

The stupid thing about advertising a location to buy drugs is now the police know where to pay extra attention, Andrew wrote.

Deborah considered another explanation: That is a sign that someone is leaving town. I saw this in the military when a service member transitioned to a new duty station or was leaving the military. They would throw their boots over the lines.

Both Kathy and Felicia posted a link to Snopes. I decided to click on it, curious as to what Snopes had to say about sneakers slung onto power lines:

The list of explanations as to who put the shoes there and why they do it goes on, according to Snopes.  Suggestions include:

The Snopes site went on to say There’s no one definitive answer as to why those shoes hang from telephone wires. Perhaps the answer lies within each of us, shoe-slinger and non-shoe-slinger alike.

I guess these poor souls didn’t make it to heaven… Lynda concluded.

And there you have it, folks. Shoes on power lines, knives on the edge of the road, lead to all kinds of speculations and story ideas. It’s like interpreting other mysteries, such as why a seashell is found on a Ligonier Valley sidewalk, or a turtle is crossing the road around the Diamond in the center of Ligonier, or a healthy person succumbs to cancer while a drug-ridden person lives to be 90. Stories and myths abound.

These questions are a part of life, it’s mysteries, intrigue, and curiosities. It’s why writer’s write, singer sing, and artists paint: There’s no one definitive answer as to why.

In several if my nine lives I have been a medical lab technician and a human service worker specializing in child day care, adoptions and family abuse. Currently I am a photo/journalist/writer working on a novel and a short story. My general writings can be viewed at www.carolyncholland.wordpress.com. My novel site is www.intertwinedlove.wordpress.com.
View all posts by carolyncholland →
This entry was posted in Feature Articles, Ligonier Valley, SOUTHWESTERN PENNSYLVANIA and tagged All posts, Commentary, Journaling, Latest post, Life, Lifestream, Miscellaneous, Musings, postaday2015, Sneakers, Sneakers slung across wires. Bookmark the permalink.