A Bucket-List Trip to Florida: Part 1

Posted on May 3, 2015 by carolyncholland

A BUCKET-LIST TRIP TO FLORIDA: Part 1

Funny that WordPress should ask when was the last time I did something completely new and out of my element…followed by the questions how was it and would I do it again.

(Strange, yet again, the WordPress prompt for May 10, 2015 is journey—Of course, the spontaneous, unexpected, journey my husband Monte and I took to Florida in April was a journey in relationships and experiences.)

People who know me consider me an adventurer who likes traveling.

They are partially correct. I love being in and exploring in depth new places—and meeting the people along the way. However, I truly dislike the travel aspect.

Thus, when my husband Monte suggested we fly to Florida, rent a car, and drive back to Southwestern Pennsylvania, I balked. Such a long drive.

“Fly?” Not that I haven’t flown before.

Easter 1964 I flew from Columbus, Ohio to Texas (returning on a Greyhound bus). At age 20 a friend with a pilot’s license took me for a flight in a small plane—I even took the controls for a few minutes. My next flight was on January 2, 1998, when Monte arranged for me to visit my sick mother, hospitalized in Bangor, Maine. It was the year of a major ice storm, and I flew into icy Boston and caught a plane to Bangor. My mother died the next morning, and after her funeral in Presque Isle I traveled back to Bangor to fly to Buffalo.

My last flight was in November 2000, when Monte and I flew to Munich, Germany, to visit my son, who was doing post-graduate work there. Mind you, I will never fly across the “pond” again.

Nor did I have any urge to fly anywhere else. Especially Florida.

I understood his desire to travel there. He has a number of nieces and a nephew there. They’ve married and had children. Some he’s not seen for 35 years, others he’s never met. He’s wanted to travel to Florida for a long time.

However, we were discussing visiting relatives and friends in North Carolina.

Monte’s suggestion had merit. A car rental business advertised rent a car in Florida and drive it one way out of the state…for $9.99 a day. This is less than would cost to drive our own vehicle such a long distance.

To get to Florida we could fly out of nearby Arnold Palmer Airport in Latrobe to Orlando for a very reasonable cost.

The distance to drive from Florida back to Pennsylvania was only a little more than driving to and from North Carolina. And we had family and friends along the way, all but one of them we hadn’t seen for years.

Yes, his suggestion had merit. So I agreed to his plan. How could I deny him his dream, his item on his bucket list?

Monte purchased our $45 airline tickets and shelled out the $30 I insisted he do so we could take one 40 pound suitcase.

Our daughter Sandy took us to the airport and stayed until our flight took off, taking pictures of our plane traveling down the runway.

Neither of our tickets were for the window seat. Its ticket-holder hadn’t boarded yet so I took the opportunity to shoot pictures of the airport out the window. When the ticket- holder arrived she told me not to move—Taylor didn’t care about sitting in the window.

The flight was too bumpy to allow reading, but the clouds, where it didn’t look foggy, were beautiful.

Monte’s niece Karen and her husband Bob picked us up at the airport. When we exited the building I felt a blast of hot, humid air.

During our long, nighttime drive to our hotel in downtown Orlando (where Monte would pick up our rental car) hotel Karen mentioned that the greenhouse on Rollins College campus, where another niece worked, had a corpse flower that was ready to bloom.

“A corpse flower?” I responded. It was a ray of light in the midst of my visit where I would be meeting a lot of people I didn’t know in a place I had no desire to be.

She was surprised at my reaction. Most people aren’t familiar with the corpse flower. However, I wrote about this unique plant in a devotion on March 16, 2008: THE CORPSE FLOWER (Amorphophallus titanum)—A WOLF IN SHEEP’S CLOTHING-Is in Bloom.

The next day we joined a large group of Monte’s sister’s children and their families at an Italian restaurant.

After lunch Monte’s cousin Gail took us to the college greenhouse and showed us the corpse plant: The Birth of a Corpse Plant Blossom at Rollins College . 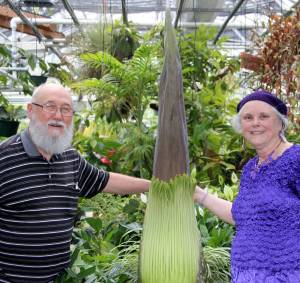 The weather was so hot and humid I came close to having heat stroke.

On the way to our car we examined the college’s Walk of Fame, a line of rocks along the sidewalks that commemorate people and events associated with Rollins College. We were looking for Mr. Fred Rogers stone.

Latrobe (Pa) native Mr. Rogers, of Mister Rogers’ Neighborhood, is a celebrated alumnus of Rollins College, earning a bachelor’s degree in Music Composition. After his 1951 graduation he maintained a relationship with the Music Department at Rollins and was known to sit in on classes when he visited the campus.

Rollins College possesses one of Rogers’ sweaters — sewn by his mother — and a pair of his sneakers, both a part of the Rollins College archives and special collections. 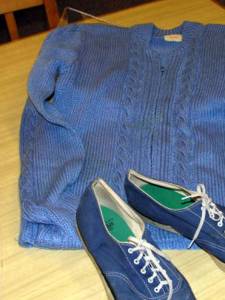 Mr. Rogers earned his own stone on the Walk of Fame. However, we were unable to locate it, and heard it was either removed for safety or stolen. (We did find a stone for another Southwestern Pa. historical figure—Albert Gallatin) 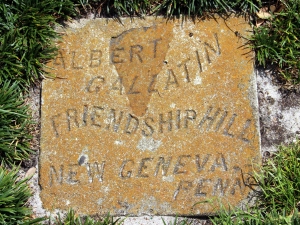 We dined with Gail, Johnny and Eddy, Monte’s relatives, and then we all enjoyed a nighttime stroll around Lake Enola near our hotel. I was entertained by the female swans who sitting on their eggs, protected by their male swan. One white male was attempting to take a neighbor’s last hatched duckling for a meal. A man tried to shoo him away from his prey.

It didn’t look like we would be able to stay in Orlando until it bloomed—we would just miss it.

The next morning I called Alan Chryst, the biologist working with the plant, and interviewed him. Then we took a leisurely stroll around Enola Lake in downtown Orlando. The swans were plentiful. 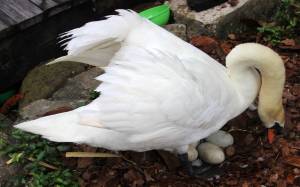 We returned to the City Diner nest to our hotel and met with Frank, who was in my child care home in Slippery Rock over 40 years ago. We hadn’t seen him for about 30 years, and I was surprised he had such positive feelings about Monte and I.

He took a break from his work at Orlando’s  Arnold Palmer Medical Center, which includes the Winnie Palmer Hospital for Women & Babies, opened in 2006 and named for Palmer’s late wife, and the Howard Phillips Center for Children & Families, which offers programs for families dealing with child abuse, sexual trauma, developmental disabilities and HIV/AIDS. The Arnold Palmer Hospital for Children opened in 1989.

Arnold Palmer, like Mr. Rogers, is a native of Latrobe,(Pa).

After lunch we left Orlando by way of Rollins College, where we met and talked with Alan Chryst, who showed us three other plants in the greenhouse, one the same age which might bloom soon, the other 2 only 18 months old.

By the time we reached our car to leave I again almost had a heat stroke.

To read the conclusion of the Florida part of our travel click on A Bucket-List Trip to Florida: Part 2

In several if my nine lives I have been a medical lab technician and a human service worker specializing in child day care, adoptions and family abuse. Currently I am a photo/journalist/writer working on a novel and a short story. My general writings can be viewed at www.carolyncholland.wordpress.com. My novel site is www.intertwinedlove.wordpress.com.
View all posts by carolyncholland →
This entry was posted in Feature Articles, TRAVEL, WORDPRESS PROMPTS, Wordpress writing and tagged All, All posts, Arnold Palmer Medical Center, Corpse plant, DPchallenge 5/2/2015: beyond the pale, Enola Lake: Orlando, Journaling, Latest post, Lifestream, Miscellaneous, Mr. Rogers and Rollins College, Orlando: Fla, postaday2015, Rollins College. Bookmark the permalink.

1 Response to A Bucket-List Trip to Florida: Part 1