Lithuanian church liturgy surrounding Easter week rites, including Palm Sunday, are comparable to those in other parts of the world. However, many Easter traditions outside that church liturgy are uniquely Lithuanian.

Palm Sunday in Lithuania has its own unique tradition.

While many countries in non-humid/warm climates import palms for their Palm Sunday celebrations, many residents of these countries have never seen an actual palm except for the commercial imported dried palm leaves.

Lithuanians do not import the palm leaves.

On Palm Sunday Lithuanians who attend church bring a branch of the verba, or dwarfed spruce tree, to be blessed. They carefully choose and cut well-formed branches of the verba on Saturday, then weave into them branches of indiginous plants—sprigs from juniper, misteltoe, weeping willows, pussy willows, and osier—and decorate them with colorful dried flowers. The verba used for Palm Sunday are more like bouquets than the traditional palm branches are.

These verba are blessed during Mass on Palm Sunday and taken to homes, where they are dried. The needles are pulled off and the branches left are placed behind a holy picture or in the rafters for protection.

The needles are saved in a bag to be used as incense during thunderstorms and for sicknesses and deaths.

There is a saying today that relates an old Lithuanian custom: one must be hit with the verba to remain healthy during the coming year.

An ancient tradition of whipping each other with palms still exists. It takes place on Palm Sunday or on Easter Sunday while chanting Ne as musu, be verba musa—I do not hit you but the verba hits you.

Or, when returning home with consecrated palms, one whips the head, back shoulders of those who stayed home, repeating all the time illness out, health return. The following words were spoken or sung, when striking with the palm:

I am not the one striking

The Palm is striking

You are not in pain

The Palm is in pain

Soon it will be Easter

It is not I who is thrashing, but the rod

It will thrash until it breaks

The great day is in a week

It will entertain everyone

Remain the same as you have been

Be healthy as a fish.

The person being beaten can ransom himself from the beating by promising the “beater” an Easter egg (margutis).

This tradition has its origins in ancient times, when all greens had a special significance. The juniper branch’s special power would give you a new life and prevent sickness.

Later, the influence of the church’s blessing attached the power to chase Satan away to the verba. Once blessed the verba becomes a sacramental and as such it is believed to ward off evil.

An alternative verba tradition occurred on Palm Sunday morning, when a father hits his children on their bare legs to wake them from their sleep so they could attend church. 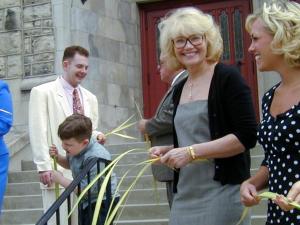 In several if my nine lives I have been a medical lab technician and a human service worker specializing in child day care, adoptions and family abuse. Currently I am a photo/journalist/writer working on a novel and a short story. My general writings can be viewed at www.carolyncholland.wordpress.com. My novel site is www.intertwinedlove.wordpress.com.
View all posts by carolyncholland →
This entry was posted in Easter/Holy Week, HOLIDAYS and tagged All, All posts, Latest post, Life, Lifestream, Lifestyle, Lithuania, Palm Sunday in Lithuania, postaday2015, Religion, Verba. Bookmark the permalink.